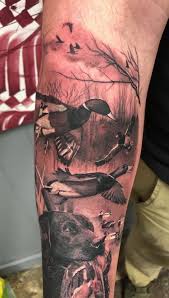 Traditionally, hunting tattoos have various symbols, including deer, wood-grain textures, birds, and more. They are often placed on the back, chest, or forearm. These tattoos depict the hunter and his favorite game animals, and some hunters choose to get the skull of a big animal. Getting a hunting tattoo is a great way to express pride in the sport.

Various hunting symbols have different cultural meanings. For example, a deer symbolizes food and sport hunting, and many companies have even incorporated it into their brand logos. Birds are also popular symbols of hunting, and are often paired with deer as both are animals of the forest. These tattoos will look good on your body, and they will have a special meaning to you.

Other hunting symbols include lions, tigers, and wolves. While these animals are commonly associated with bravery and assertiveness, they can also represent the hunter’s strength and confidence. A fox, meanwhile, is a cunning and intelligent creature, and it can represent adaptability and innovation. For those who don’t hunt, a wolf tattoo may be perfect for them.

Tattoo designs that incorporate the theme of hunting have been around for centuries. Hunting was the lifeblood of human civilization, and the first tattoos involving a hunted animal date back to the pre-civilization era. Hunting was a male-dominated activity; women were more often tasked with home care and food preparation. It was also a common test of bravery and a way to prove your manhood. Hunting weapons were generally made of wood and stone.

Some people choose to have a memorial hunting tattoo featuring a hunted animal. The tattoo often incorporates a phrase in remembrance of the deceased hunter. Depending on the type of memorial hunting tattoo, the phrase can be added in any spot on the body. While hunting is an activity that can be personal, there is no need to feel guilty for wearing a memorial tattoo of a hunted animal.

A hunter encounters a variety of animals while hunting. In the US, waterfowl are hunted by about ten million ducks each year. The intricate feather patterns on these waterfowl can be used to create an impressive tattoo. Waterfowl, in particular, are widely hunted. This popularity makes these animals a popular choice for hunting tattoos. If you’re looking for a large tattoo, a bird tattoo can be a great choice.

While it might seem like a simple tribute to hunting, there are a number of different designs that have a meaning. Some are humorous and some are extremely serious. For example, Michael has a tattoo of crabs and stripers. Another man has a tattoo of an elk, while Ron has one of a hunting dog on his arm. His wife was hesitant at first, but eventually allowed him to get a moose tattoo to commemorate the animal that killed him.

A tattoo with a hunting theme can be a fun way to commemorate hunting. The hunter’s image is a traditional design that depicts the hunter pointing a gun toward the target. This design is best worn on the back or chest. Originally, this type of tattoo was created to honor a father who had hunted for sport. Today, many hunters choose to get the image on themselves for personal reasons, and it’s an excellent way to honor the hunter in your life.

The history of hunting is long and varied. Mesopotamian sculptures portray kings hunting for large game animals. In ancient Greece, the Aristocracy viewed hunting as a manly activity, and Hindu scriptures consider it an honorable occupation. Pagan religions also made hunting a part of their religious ceremonies. Nowadays, hunting is a popular hobby in many cultures and has become a popular choice for tattoos.

A Unisex hunting tattoo features an animal that has been hunted. Hunting has been around for a long time and different cultures have different reasons for hunting. As a result, the meaning of the hunting tattoo varies depending on where it is inked. It is often found on the back or chest. Hunting is a great symbol for independence, strength, and determination. These tattoos are also considered a masculine and powerful statement.

The most traditional method of hunting is with a rifle. This design has strong, unmistakable lines and is often accompanied by interesting details. For sport hunters, big game animals are prized quarry. Big game animals are impressive in size, strength, and connection to the wilderness. Those with hunting backgrounds may want to consider getting a hunting tattoo. It is a great way to show your appreciation for hunting and your love of animals.

Unisex hunting tattoos can be done in several ways. The hunter can carry a gun, or use a knife to kill the animal. If the hunter has a dog, the dog can assist in the hunting process. This type of tattoo can be done on the back, chest, or arm. The hunter can also choose to carry a dog. Dogs are usually used by hunters to help them find their prey.

Another popular hunting motif is a bow and arrow. This hunting design has a lot of meaning behind it. It represents the courage of a hunter and carries a sense of direction and pride. These hunting tattoos can be small or large. They can be done on any part of the body and are an excellent choice for a man’s body. If you’re a hunting enthusiast, getting a hunting tattoo will show your passion and pride.

How To Buy Quality Hunting Bows And Arrows