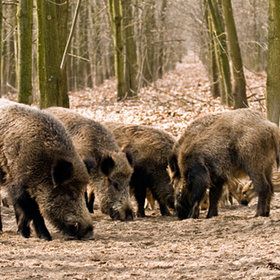 Wild hog hunting in Arkansas is a fun and rewarding hobby. Not only is it a sport that requires skills, it is also a great way to spend time with your friends and family. However, before you start, it is important to understand some of the laws and regulations that surround this activity.

Wild hogs are one of the most destructive invasive species in the United States. They consume young game birds and domestic livestock, destroy habitat, and carry 45 bacteria, parasites, and diseases.

Hunting for wild hogs is not a difficult task, but you do need to know the correct laws and regulations. Several states allow hunters to hunt for these critters. In Arkansas, you are allowed to take part in recreational hog hunting.

You do not need a special license to participate in a hog hunt. However, you are required to notify the local sheriff of your plans to engage in the recreational activity. If you are not the owner of the land, you can only take part in the hunting if you get permission from the landowner.

Whether you are a resident or visitor, there are some hog hunting laws you should know about. While it’s a fun activity, you should be aware of the legalities and safety requirements involved.

There are many laws and regulations in Arkansas, so be sure to research your state’s wildlife management and hunting policies before you set out. Depending on your status as a resident or nonresident, you may be required to buy a hunting license. You will also need to adhere to all federal and state regulations, including the rules of the road.

In Arkansas, you are allowed to hunt hogs on your own land, as long as you’re following the proper landowner regulations. However, if you’re on public land, you’ll need a $10 permit from the Arkansas Game and Fish Commission.

A recent report by the United States Department of Agriculture (USDA) found that wild hogs cause $400 million in damages annually to crops and farm equipment. These invasive species are causing damage to native species, including ground-nesting birds, sea turtles, and alligators.

In order to lessen the threat of damage caused by feral hogs, several states have enacted legislation to discourage feral swine activities. Counties may also adopt localized reduction plans to reduce the impact of these destructive animals. However, the economic incentives that accompany the harvest of these exotic animals make removing them difficult.

One of the most important measures to control the spread of this species is to prohibit the sale of live swine. Additionally, some counties have opted to charge a fee for the harvest of harvested crops. This is not only discouraging the establishment of game preserves, but it also diminishes the incentives for maintaining the number of feral swine on the landscape.

Cost of hogs to the nation

When producers want to sell hogs at a higher price than the market can offer, they may have to use alternative markets. These include a direct marketing program, which is a way to minimize transportation costs and minimize live weight shrink loss.

Using these methods, many producers find they can sell their hogs at a premium. Some smaller producers also pool their marketings with other producers. This allows them to reach more buyers and get their hogs shipped to a wider variety of locations.

Direct marketing eliminates the need for a middleman and allows producers to earn commissions on their sales. It is also usually less time consuming. Packers can also take advantage of the direct market.

Another alternative is to sell on a carcass merit pricing program. Often, this program will result in a higher price, but it will also require more effort on the part of the producer.

Limiting the spread of feral swine

When hunting wild hogs in Arkansas, you must remember to limit the spread of feral swine populations. These destructive and invasive species can cause damage to crops, livestock, and native wildlife. They can also serve as a reservoir for diseases that affect humans and other animals.

Many US state governments have begun developing laws to reduce feral swine populations. Some have adopted a ban on hunting fees, which discourages hunters from introducing feral swine into new areas. Other states have banned the transport of live feral swine.

Hunters must also keep in mind that swine are capable of carrying diseases. In addition, they can cause property damage. Their blood and fluids may contain brucellosis, a bacterial infection that can infect humans.

The Centers for Disease Control warns hunters to avoid contact with infected animals. Additionally, hunters should not handle animals that have recently been butchered.